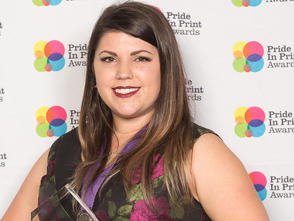 Apprentice of the Year

Myra Anderson of printing.com was named this year’s PrintNZ Apprentice of the Year, with the Training Company of the Year being awarded to Soar Print Group and the Trainer of the Year bestowed on PMP Print print manager Tony Reid.

Interviewed immediately after receiving her award on stage in a glittering Pride In Print Awards Night at Christchurch’s Air Force Museum on May 12, Ms Anderson says she has “reached a goal”.

“They have put on such a show and it has filled me with such pride for the industry.”

Highly praising her chief executive Symon Yendoll for “passing on his wisdom” and the printing.com team for their overall support, Ms Anderson says she enjoyed the stimulation and challenges provided by the apprenticeship process. 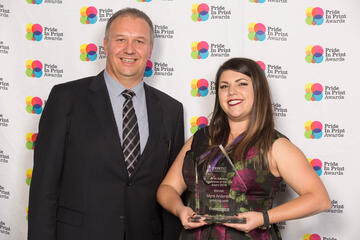 The aspects of colour management, business and quality principles “which gave me a grounding of how business actually runs”, and problem solving “what the best way is to tackle that problem head on”, were singled out as highlights.

Expressing keen and fresh ambition, Ms Anderson adds :“The apprenticeship has opened my eyes -- not just to print -- but to how the business is run as a whole, which is great. It has been the making of me.

“We’re looking at a Level 4 Certificate of Business this year and 2018 will be the Diploma of Print Management. We’re also looking at creating my own senior role within the company.”

A long-term supporter of apprenticeships, printing.com chief executive Symon Yendoll says he was all-but certain Ms Anderson would be named this year’s winner.

“Her portfolio and what she’s done over the past four years has just blown everyone away,” he says.

“The hardest thing was to get her to talk herself up, she’s actually very humble.”

One of the most enjoyable aspects of the process for Mr Yendoll was a business principles exercise.

“We spent ages doing a whiteboard session and really getting into how profit and loss works. It was actually really good -- it’s made a real difference in how Myra thinks.

“What she’s done from that is introduce a lot of initiatives for the studio, such as counting time and putting it against jobs. So she really understands the relationship of how long it’s going to take to do something to cost-effectively being able to produce a job.”

PrintNZ general manager Ruth Cobb says judges were given one of their most challenging decisions to date, given the extremely high calibre of entrants this year.

“Myra ultimately triumphed and is a very deserving winner -- the breadth of the work she has produced is absolutely outstanding,” says Ms Cobb.

“She has talked about how coming into the industry has opened her eyes about what print is and how much we use it in our world, how varied it is and the opportunities that she has seen exist within the industry.

“Myra is an excellent winner.”

Training Company of the Year

Reflecting on the Training Company of the Year Award, Soar Print/Rocket general manager and director Chris Agius says it is a welcomed endorsement as his firm continues on its objective of being a leader in sustainability, technology and innovation.

“Whether that’s sustainability and understanding which is the right bin to put your waste in or how to operate machinery, it’s all about training.” 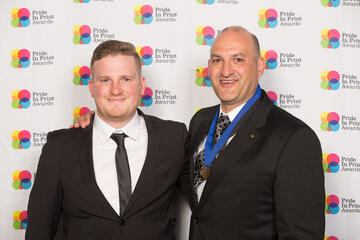 Mr Agius says the business has progressively evolved its implementation of lean manufacturing into the training arena.

“We started with the senior management team and we’re working all the way through the organisation.

“Lean is a key cornerstone in the organisation. For us to survive and to win the clients that we have, we have to be able to do it smarter, faster and better.”

Additionally, the firm has recently completed an integrity coaching course with nine of its supervisors and “people we recognise as potential future leaders”.

“They learn how they can talk and work with their staff to develop goals and objectives for them to achieve their potential. That’s just one of the courses that we’ve finished.”

However, Mr Agius humbly credits the New Zealand printing sector in general as also committing to such endeavours.

“We’re a small country, so to succeed you have to have great businesses and great people. It’s not just us, it’s everybody -- everybody is putting in that time and effort to train their staff, because you have to in today’s competitive world.

“We are just really stoked we have won the award, because it is recognition for all of the time and effort, resources and money we have spent on all of our staff and on our senior management team.”

Trainer of the Year

Stating he was “very chuffed” to be named Trainer of the Year, PMP Print’s Tony Reid also took the opportunity to dedicate the award to a close colleague, Marty Morgan, who was buried on Awards Night after losing his battle with cancer.

“All of the hard work I’ve done throughout the last two years couldn’t have happened without him,” says Mr Reid.

“He was one of my key guys in training.”

Fully illustrating his passion, Mr Reid describes apprentices as the “lifeblood of the print industry”. 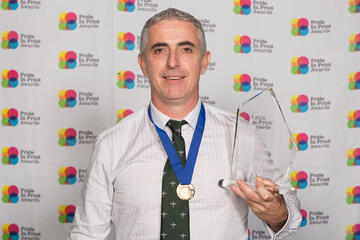 “The average age of my workforce is 43, so I’m trying to bring the new blood through. I will invest in young people who are on fire and actually want to do the right thing.”

Having been in the trade for 22 years and a trainer for the past 12, Mr Reid takes pride in having helped every apprentice put under his wing to become a tradesperson and believes strongly in leading by example.

“Every week I have meetings with the guys. Small differences in performance is big for me, so I keep them at that standard if I can. They are the future of the industry.”